#1 New York Times Bestseller • A historian of fascism offers a guide for surviving and resisting America's turn towards authoritarianism.

The Founding Fathers tried to protect us from the threat they knew, the tyranny that overcame ancient democracy. Today, our political order faces new threats, not unlike the totalitarianism of the twentieth century. We are no wiser than the Europeans who saw democracy yield to fascism, Nazism, or communism. Our one advantage is that we might learn from their experience.

On Tyranny is a call to arms and a guide to resistance, with invaluable ideas for how we can preserve our freedoms in the uncertain years to come.

"Mr. Snyder is a rising public intellectual unafraid to make bold connections between past and present." —The New York Times

Useful information compacted into a short/relatively easy read. Recommended by Jane Elliott and now recommended (by me) to anyone who doesn’t think America is treading a thin line to fascism muddled with untruth, misinformation, and the rejection of education.

powerful small book packed with important messages for these times —a guide for navigating this dangerous era in America —Cautioning against the rise of fascism in the U.S. and Europe. We must learn from history and not be complacent. Quick read. Very worthwhile.

Trump derangement syndrome at its finest. Enjoy the next 4 years !!

I’m so sorry I purchased this in hopes of reading a thoughtful description of how tyranny evolves. Instead, this is a superficial recitation of anti-Trump whining. To equate American middle-class families revolting against the export of 15 million manufacturing jobs to China to Kristallnact is the epitome of political disinformation.

An important work designed to give every-day individuals tactics to combat the world we live in today.

This is a promise to all that think Trump is anything other than a dictator in waiting, a sick individual that knows only that what he wants is what he cares about to think again and again and again. Follow the FACTS reflected in history that destroyed democratic rule. I, today move toward all the recommendations in this book, doing my part to turn an ugly tide in history back with human awareness, courage and strength. Democracy demands that I do just that. NOW.

Awesome book and one everyone should give a read.

Snyder’s pamphlet is as direct and pithy as Strunk and White’s Elements of Style. And in present-day world politics, it is as important as Elements is in becoming a good writer. It offers concrete and useful advice for recognizing the rise of tyranny and for resisting and reversing it. Snyder champions the kind of thought that led the Buddha to teach “if you meet the Buddha, kill the Buddha”—that is, observe carefully, think deeply, act wisely in consequence of personal observation and independent, critical thought. Be active, not passive. Engage with those around you and also with those distant from you. An excellent and timely read.

A timely book to open eyes and start the thought process. An important book at a critical time in American politics. No matter where you stand, no one can deny that things are very different and moving fast..but to where?

LIXIAOBO24 - STUPIDITY OF THE AMERICANS

First of all, the book is really great. However, I found the popularity of these lessons merely shows the naivete of the Amercian society. The United States and its people barely suffered in the twenitieth century, so Americans become so naive and gullible. That’s why Donald Trump was elected. Now history is back with a vengeance, maybe it’s time for an American tragedy.

There is an old Chinese curse, "may you live in interesting times." On Tyranny exposes questions about our time. It is worth a read with a critical mind. It ain't the answer but a critical signpost.

Robquix - May the truth set you free.

This book has hit home. After 72 years of life, I now truly feel our Nation is being threatened from within. This book was a wake up call, a must read We must stop being pacifist, to be proactive. Find truth. The author has hit the mark. God help us!

Fanya Yefimovna Kaplan - Lenin is alive and one of his names is Snyder.

This is a political proclamation in the style of the Russian Communist Party. The history is distorted, the conclusions are skewed, the intent is clear from page one the facts and context playing no role in producing this piece of propaganda. Could not give this production zero or negative rate to post the feedback.

Reads like a rushed blog rant bursting with bad analogies . "communism and fascism were a direct response to globalization " . Really? Lenin's rise had nothing to do with Russia being decimated in WWI ? " extremely thin discussions on the factors in place that helped fuel the rise of actual tyrants . This is mandatory reading for the tinfoil hat brigade. For everyone else that is my part of the problem , you can save your money .

RTjames - Must Read for Everyone

This book displays in a coherent and concise manner the importance of identifying tyrannical processes that can corrupt democratic institutions and ruin the lives of citizens. It is a must read for any student and all who believe in democracy.

I have been recommending On Tyranny to everyone who will listen. It's short, digestible, and yet weighty. I have plucked out sections and talked with folks for hours with people about each of them. It is not alarmist to be really concerned about this moment in American history. We could slip, fall, migrate, or whatever into tyranny. It seems the ingredients are there. On Tyranny shines a light, offers a warning.

Usually the 5 star ratings help me to decide if I'm interested in a book to read. In this case it was the one star ratings. Comparing Trump to Hitler! How dare they!

Asya1 - What a fantastic read

While I may not agree with all of the author's conclusions, he makes some really good points. I think there are some principals all Americans share and the fight against tyranny is certainly one of them.

This book is not a "not my president" manifesto. It is a plea to reasonable discussion. Are there criticisms of the president? Yes. Are all of them unjustly, and biasedly given? No. If you are solidly in Trump's camp, welcome opening yourself up to this type of literature, in order to ground yourself in honest, well-intentioned information. Please do not disregard this as just a Trump-Hitler comparison. It is much more than that. In fact, the reason I --- a person who respects this book immensly --- only give this four stars is because I feel the author could have done away with some of the more personal attacks on Trump's "politics". However, do not let this turn you away! There is so much wisdom to mine from this book. Read it, and try to honestly form your worldview in light of the facts presented. Research, if you can, what you find to be questionable. Don't just throw it out because it presents, at times, a subject that might leave your opinions vulnerable. Read with an open mind and enjoy all the gems that, when properly examined, will hopefully produce a new generation of good, American thinkers.

Oipe - Thought provoking, informative and tapping the beat of truth

Be sure to read this one. Don't miss it.

This book tells you everything you may have been afraid to know. Clear and to the point. Should be read in every household in America. Steven Gutman

The guy with one star he didn't understand the book. Wow scary wake up America.

Gunz Borgia - "Do not obey in advance."

I saw Timmothy Snyder on Bill Mahr have a well composed, educated debate and I was sold. If we the people stand idly by instead of upholding our civic duties, history can and will repeat itself.

This is an excellent, must read book for the times we are living in. The person that gave it one star obviously did not read this.

I wasn't going to buy this but after reading the one star review, " just another attack on Trump comparing him to Hitler", I'm sold! Great read, very informative. Thanks!

Save your time and money. Just another hyper partisan attack on Trump, comparing him to Hitler!

This should be required reading for everyone in highschool and all those who want to help us move forward in these "disjointed" times.

On Tyranny, Twenty Lessons From The Twentieth Century by Timothy Snyder

On Tyranny: Do not obey in advance. Most power of authoritarianism is given. In times like these, individuals think…

@MahilaCongress: On this day in 1942, Mahatma Gandhi gave the clarion call against the British to 'Quit India'. The entire top Congres…

@FloraChanhkhk: @SenTomCotton Thank you 🇺🇸 for taking a leading role to advocate the universal core values together! The free world pls…

@KEkpechi: If not for @mazinnamdikanu and #ipob consistency against the tyranny of fulanis, Nwanne Biafra Land would've been on fire as…

@VanCougat: @lynneswhim This really is the sort of stuff you see in more advanced authoritarian states - although Trump is upping the…

@MahilaCongress: On this day in 1942, Mahatma Gandhi gave the clarion call against the British to 'Quit India'. The entire top Congres…

@BirchJonh: @TonyaLampley @DeAnna4Congress Fuck that! The country’s on fire antifa/blm is a racist black supremacist communist group of… 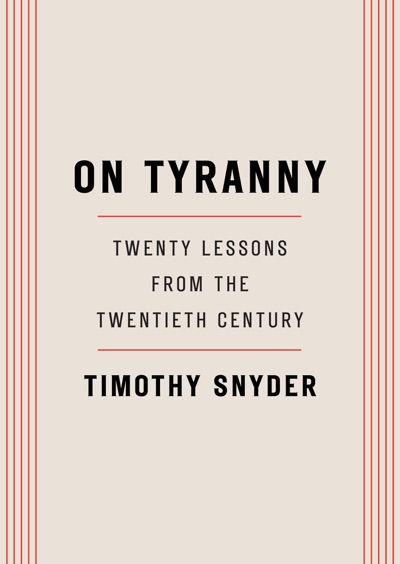