The first three full-length novels of the Immortal Vegas Series in one box set, plus an introductory novella.

Tarot-reading artifact hunter Sara Wilde has had her share of tough assignments, but this one just might take the cake. When her newest client hires her to steal a fertility idol from an Amazonian sex-and-death cult, she finds herself south of the equator and shoulder deep in true believers, while Rio de Janeiro gears up for the closing celebrations of Carnival.

Stealing the idol is one thing, however. Keeping it is another.

The arcane black market has drawn a host of cutthroat operatives and Sara's now in their sights. In a race across one of the most colorful cities in South America on its most famed night of the year, Sara must navigate cunning enemies, backstabbing allies, a fifty-foot wedding cake float and a new, sensually mysterious contact who may be friend or foe...and whose name she'll never know if she doesn't survive One Wilde Night.

Using her well-worn Tarot deck, magical-artifacts hunter Sara Wilde can find anything--for a price. And the price had better be right, since she needs to finance her own personal mission to rescue several young psychics recently sold on the paranormal black market.

Enter Sara's most mysterious client, the wickedly sexy Magician, with a job that could yield the ultimate payday. All she'll have to do is get behind Vatican walls... and steal the Devil himself.

But play with the Devil and you're bound to get burned.

From the twisting catacombs of Rome to the neon streets of Vegas, Sara confronts ancient enemies, powerful demigods, a roiling magical underworld about to explode... and immortal passions that might require the ultimate sacrifice. But oh, what a way to go.

No matter how the cards play out, things are about to get Wilde.

All that glitters may not be gold.

When an antique gold show comes to Vegas, artifact-hunter Sara Wilde's job is simple: to locate and liberate a set of relics rumored to give their bearers access to an ancient, incredible power. Yet within the Connected community, whispers of a war against magic draw every psychic, mystic, warlock, and witch to Sin City. The most powerful Connected also covet the infamous relics, but no one wants them more than Sara's client--the insufferably arrogant, criminally sensual, and endlessly evasive Magician.

Sara's heist takes a turn for the trickier as the smoky-eyed specter from her past, Detective Brody Rooks, is assigned to investigate a break-in at the gold show, forcing her to confront the one man in Vegas she can't bluff. Worse, as the game changes anew, Sara is forced to turn to the one person she knows will manipulate, obfuscate and beguile to get whatever he craves. Only now, it seems, the Magician wants her.

Sometimes, when the deck is stacked against you... you've got to play the Wilde Card.

Born To Be Wilde

The past has a way of catching up with you.

If there's one thing that Tarot-reading magical artifacts hunter Sara Wilde has never been able to track down, it's the truth about her own past. But now a powerful new threat to the psychic community will take Sara back to where it all began: the last job she worked with Officer Brody Rooks as "Psychic Teen Sariah," the job that destroyed her life and sent her on the run. Because the enemy she fled all those years ago has returned... with a posse of demons as his personal entourage.

From the glittering chaos of Las Vegas to the Lost City of Atlantis, Sara must risk everything in a quest for vengeance that grows darker and more twisted with every step. To succeed she'll have to face the truth about her past, her abilities...and the impossible, unstoppable attraction she has to the Magician. A truth that will reveal her ultimate role in the war on magic.

Life is full of surprises when you are Born to Be Wilde. 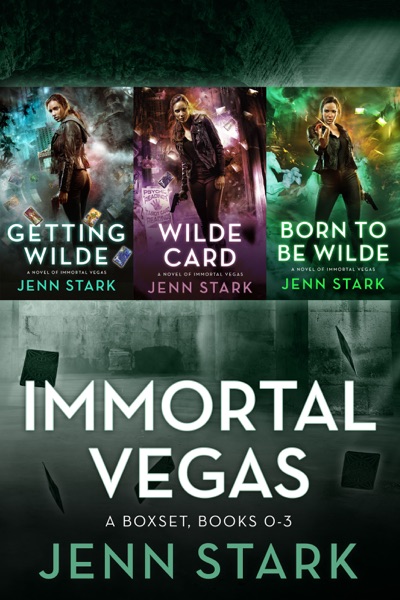