Murder on the Sugarland Express by Angie Fox Book Summary

Ghost hunter Verity Long is overdue for a little R&R (rest and romance) with her boyfriend, Ellis, and a vintage train trip through the Tennessee mountains seems like just the ticket. The Sugarland Express carries history and nostalgia in every compartment, and Verity is determined to enjoy it—without ghostly interference. But the ghosts have other plans…

On a dark, desolate night nearly a century ago, the train was stranded in the mountains, and a young woman was found stabbed to death in her locked compartment. The murder was never solved, and a ghostly Belgian detective is still pursuing the case from the grave.

To Verity’s dismay, all of the ghostly suspects are back. And when history repeats itself and a new murder mirrors the old, it’s up to Verity and her friends to discover which of the passengers—dead or alive—could be behind the murders before the killer strikes again.

What Reviewers are saying…

5 Stars!  “This is very likely Angie Fox's best book to date, and I devoured it in one fast sitting.”

5 Stars!  “I love all the components of this story but it's the characters that completely steal the show.”

5 Stars!  “This was 2 murder mysteries for the price of one. Loved it as I do all of Angie Fox's novels.”

5 Stars!  “Just when you think you’ve got it figured out the twist comes in and throws you right off the trail. I loved this story so much.”

gweneeth - Murder on the Sugarland Express

It was an interesting read but the heroine was boring. She had no backbone and Ellis should have ditched her when she brought Frankie along on their get away trip. I wasn’t impressed. Thanks g

This is a cute series. A little shallow and predictable but enjoyable... more fun than a Nancy Drew. Entirely easy to read. This book wasn’t my fav but it was still a nice quick read with lovable characters.

I really enjoy the excellent story! Being an Agatha Christie fan the title is a play on her Murder on the Orient Express. The difference is in this book is two somewhat related murders get solved. We have action, mystery , humor and romance. Verify and Ellis trip has lots of side stories but you will enjoy it!

Verity and Frankie join us again in a new and exciting adventure. This is a fast paced story with parallel realities, in-depth characters, and surprising plot twists. The intricate, layered murders engages the reader as we switch between the present day and the spirit plane during the recreation of historical railroad train journey. As the plot develops, Frankie is drawn into a greater role in the investigation. Romance figures as a key element in motivation of many of the characters for good and bad behaviors and outcomes . When Verity realizes that the murder on the ghost plane is a predictor of murder in real life, the reader can actually feel the heaviness in the air as the anxiety rackets up between the people on the train as plot challenges occur. Unexpected collaborations bring resources to present problems and hope for better relationships. Trust develops when unexpected people turn around their prior bad actions with heroics. The mix of young and old, past and present with an attention to detail and accuracy makes this book so special to the reader who is looking for a complex mystery with a historical component. The addition of the Southern Ghosts lend a realism with that fun charm specific to the region and the era of the ghost. Suspense in all the right places had the reader clutching the chair arms while waiting to see if the characters succeeded. At other times, laughter bursts forth especially with Lucy, the pet skunk. I would highly recommend this book! I received an ARC prior to review.

Another fantastic Angie Fox book! This time Verity and Ellis are taking a romantic vacation on the rehabbed Sugarland Express. They planned on leaving everyone (alive and dead) in Sugarland, but of course things never work out the way they plan. This is a fantastic trapped on a train mystery with perfect timing of being released so close to the theatrical release of Murder on the Orient Express. It’s obvious the author was influenced by Agatha Christie, but the mystery and the characters are all Ms. Fox’s! Highly recommended!

This is the sixth book in the Southern Ghost Hunter Mysteries series. Verity is ready to get away on a small trip with Ellis without any ghosts. But, of course, she can’t say no to Frankie when he wants to go. And, Frankie isn’t the only ghost on the train. Long ago, there was a murder on the same trip, and all of the ghosts are back. When a murder happens on Verity’s trip in almost the same way as the ghostly murder, Verity has two crimes to solve. But will she solve them before the killer strikes again? I really can’t say enough good things about this book and series. Ms. Fox is a wonderful storyteller, and this book is spectacular. Her characters just come alive on the page, and you are right there with everyone, feeling and seeing the whole plot. I just love that the characters feel so real. And, the mysteries in this one are just so interesting, I couldn’t wait to see whodunit for both of them! I can’t say too much, but something happened at the end that made me cheer. I can’t wait to see what happens now in future books! If you are a fan of this series, you will love this one as it’s the best one so far. If you haven’t started the series, you can start with this one, but I’d start at the beginning to get all the subtle nuances. Highly recommend! Thanks to the author for the e-copy which I voluntarily reviewed.

Murder on the Sugarland Express by Angie Fox is the sixth installment in The Southern Ghost Hunter Mysteries. Verity Long feels the need to escape Sugarland, Tennessee after an incident with her ex-fiancé, Beau Wydell at the soft opening of Southern Spirits. Ellis Wydell, Verity’s boyfriend, books them on a trip on the Sugarland Express. Verity is hoping for a break from mysteries and ghosts while on the trip. Unfortunately, Frankie (her resident ghost) believes it will be the perfect romantic getaway for himself and his girl, Molly. Verity soon learns that the train has a dark history attached to it (and some unwelcome guests in the cabin next door). As the bell rings on the Sugarland Express, the old ghosts are being called back. The original train experienced a murder before a bridge collapsed and plunged the train into the icy river. Inspector De Clercq (a ghostly detective) is intent on solving the original crime. It is soon apparent that the Sugarland Express is following in the original trains footsteps (so to speak). A woman is found murdered in compartment 9 in the exact same spot as the original murder. Verity, Ellis and some unlikely allies set out to catch two killers—one past and one present. Will the train make it back to Sugarland or will it suffer a similar fate to its predecessor? Murder on the Sugarland Express can be read alone. I found the story to be well-written, have a decent pace and enjoyable to read. I did find, though, there to be some repetition of details (and a couple of slow spots). A little fine tuning would not go amiss. Murder on the Sugarland Express has humor, intrigue, romance, ghosts, a cute skunk, and plenty of action. I loved the descriptions of the train (I found out something I never knew about the caboose). What mystery lover would not love to take a ride on a replica of a vintage train (especially one with ghosts and a mystery)? The mysteries were engaging with great details. I especially liked two clues on the vintage (1929) murder. I had hoped that the mysteries would be more challenging. It would delightful to finally see growth in Virginia and Beau Wydell (it’s about time). Whether it sticks or not remains to be seen. Readers will be entertained with Frankie’s hijinks. At the end of the book we get a hint of what to come in the next book.

What a wonderful story line . Kept me riveted to reading the book . The author did a wonderful just a she did with the last to books is this series that I read.

Wolf_Jade - Another fantastic book in this series

Another fantastic book in this series. Looking forward to the next one. I would highly recommend this series. Great characters, both living and ghost, and wonderful stories.

Join Verity & Frankie in another mystery. Quirky things can & will happen. Twists u don’t see coming. Absolutely love Angie Fox. Recommend to all 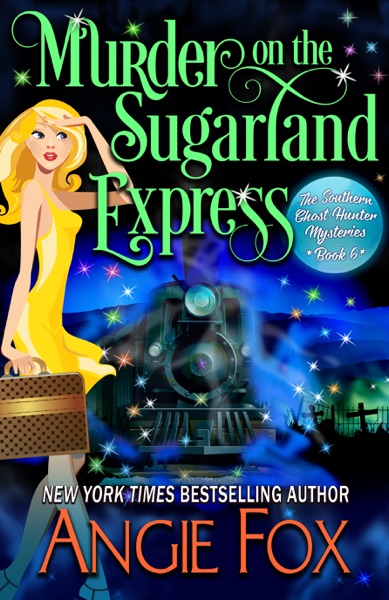 Murder on the Sugarland Express Synopsis