How to Date a Younger Man by Kendall Ryan Book Summary

Tips for Surviving a Fling with a Sexy Younger Man …

First, you’d think as a thirty-something-year-old woman, I’d be immune to Griffin’s flirty comments and six-pack abs. You’d think that his carefree playboy attitude, or the fact that he’s still finishing grad school, would deter me.

If you accidentally bang your best friend's younger brother, here are a few important tips...

One: Do NOT brag to your friend about how well-endowed her brother is.

Two: Do not go back for seconds. Or thirds.

Three: Do not let him see your muffin-top or jiggly behind. And definitely don't let him feed you cookies in bed. Cookies are bad. Remember that.

Four: Act like a damn grown up and apologize for riding him like a bull at the rodeo. And DO NOT flirt with him when he laughs at said apology.

Five: This one is crucial, so pay attention.

Do NOT under any circumstance fall in love with him.

How to Date a Younger Man (Kendall Ryan) Book Reviews

Layne and Griffin sitting in a tree, k-i-s-s-I-n-g, and a lot more except actually dating. In the way is the fact that he’s her bestie’s younger brother and 10 years younger than her. Layne just wants to find Mr. Right and start a family, but what about Mr. Right Now? A fun read.

Debsanch - How to date a younger man

Sometimes KR books are a miss for me but this one was a triple hit! Can’t say how much I enjoyed it. Bothe characters were absolutely perfect for one another, side characters were amazing. Actually loved Wren, whom I wasn’t sure about, please do a book with her character. Thanks for for a sweet read

When Layne gets propositioned by the sexy, younger massage therapist she is intrigued but says no. She is shocked to find out that the guy is her best friend’s brother. Griffin has a secret crush on Layne. Sweet and sexy age gap, forbidden romance. I liked how persistent Griffin is without being creepy. I liked Layne’s hesitance. A great romance book with lots of feels.

Samantha B. Sokol - Another hit from Kendall!

Another hit from Kendall! This book was a little different than the typical read from Kendall but I enjoyed it like every other book! Layne has worked hard to establish herself in the professional world as a lawyer and build her own business from the ground up. When she gets a massage as a gift from her staff, she tries to get out of it but the masseuse, Griffin, will have none of that. While Griffin is attracted to Layne, and she is attracted to him, they find that there is a ten-year age difference between them, with Layne being older than him and she determines things would never work. Later that night, the table turns on her when she finds out Griffin is none other than her best friend’s younger brother. Thus starts the back and forth between these two for FOUR YEARS until they finally succumb to their feelings that have continued to develop over the course of their meeting. When Layne finally decides to give things a try with Griffin, it’s explosive, but her reluctance to accept their relationship almost makes her lose everything with him. It was definitely an enjoyable read with the typical Kendall spin and I can’t wait for her next book! I voluntarily read and reviewed an Advance Reader Copy of this book.

I LOVE all of Kendall’s books. This one was right there with them. It was slightly confusing where is starts then say “4 years ago” and continued to come to present day. Griffin is the ultimate man!

Another fabulous book by Kendall Ryan. I loved Griffin right off the bat and loved the friendship between him and Layne. This book was more about a relationship that grew from friendship and attraction. And it hooked me from chapter one. Layne was attracted to Griffin right away but the age difference between them was what held her back and also finding out he was the younger brother of her best friend. But it didn’t stop her from making Griffin one of her closest friends. This book was a fantastic example of friends to lovers. I loved everything about the friendship between Griffin and Layne. This gave them the chance to learn more about each other. When Layne was finally able to move past the age difference and take a chance on Griffin it was Wow! These two were very hot together. This was a great book and I seriously read it in one sitting, it was that un-put-downable!!

It is refreshing to read a book where the woman is older than the man. Although age gap romances are not normally something I gravitate too, having read numerous books by Kendall Ryan I was intrigued to read her spin. Although, not my favourite book from Ms.Ryan, it was an enjoyable read. Layne is a successful lawyer who has focused on building up her firm, putting her personal life on hold, that is, until now. Having watched her friends find happiness and have families, her focus is shifting and now she wants what they have. Griffin is ten years younger than Layne but he is interested in pursuing her, no matter how many times she turns him down. He is arrogant, cocky and sure of himself and totally swoon worthy. At times the story became emotional as Layne struggles to come to terms with her feelings and that her preconceived notions may need to be adjusted. I was frustrated with their lack of communication at times, they both seemed to be at cross purposes. However their path to happiness was entertaining. Can Griffin convince Layne to take a chance with him? One click and find out.

This heartwarming story was just refreshing with witty banter and great friendships!It was a book that is right up my alley! The quintessential older woman, younger man story that I thoroughly enjoyed! There was just something about both Layne and Griffin that made my heart incredibly happy! Layne is a successful woman who longs for a complete life, a beautiful house, a man and kids! It just hasn’t happened yet! She’s now at the point of concern and she struggles with an age gap and whether she should! Should she??? Griffin and Layne have known each other for a number of years and it was only after some certain words that Layne embraces her life and looks to the future! Griffin is the most caring, beautiful man, he’s stuck in between a rock and a hard place and also has some difficult choices to make!!! Can these two really become something beautiful or is the age gap an issue? Loved, loved, loved it!!

4.5 Stars for How to Date a Younger Man the new stand-alone from Ms Ryan. I have read a fair few books by this author but none that were an age gap romance so I was intrigued to see what her spin on this genre would be and I wasn’t disappointed. Layne is a successful lawyer who’s main interest in life is building up her firm, she has no time for men or relationships until Griffin entered her life. Griffin is an arrogant, cocky typical younger man, he is very sure of himself and so very swoon worthy but he is also 10 years younger than Layne so can he convince her to take a chance of having some fun or even trying a relationship...... This book has all the feels, it’s emotional, it’s witty and at times it had me holding my breath as this couple cane to terms with their feelings. The road to happiness is not always easy but this road had more than a few bumps along the way. An entertaining, enjoyable read that I highly recommend.

LilleyLoohLah - I could not put this book down

The author, the cover, and the synopsis sold me on this book. A triple whammy, and as per usual Kendal Ryan did not disappoint. Best friend’s younger brother sexy romance. What’s not to like? There was actually one thing that I was not too keen on. Our heroine, Layne. It took me a while to warm to her, and for one reason alone. She kept putting off Griffin’s advances. If she’d of had a good reason I wouldn’t have minded, but she had a stupid preconceived notion that because Griffin was 10 years her junior there could never be a possibility that a relationship with them could work. As someone who doesn’t think that age matters in a relationship I struggled with her not accepting the 10 year age gap. Yes, it’s more unconventional for a younger man to be with an older woman, but I’m all for it. She had the answer to her dreams right in front of her and she chose not to see it. When she started coming around to my way of thinking, the story really heated up. Then we have Griffin. He was perfect, I loved him. Oh, and let’s not forget that cover. I loved it! It summed up exactly how I imagine Griffin looked. Let me also say, he had a heart of gold, and he would have done anything for Layne. I’m just so glad she finally came to her senses. A sweet, funny, sexy romance that I had trouble putting down. I received an advanced copy of this book. This is my honest review.

@MattHelgeson I'm just surprised how popular they seem to be with people on here. Every place I've cooked that had…

How to Date a Younger Man

@GiaRussoRP I've been reading How To Date A Younger Man by Kendall Ryan and I'm struggling... 😬

@Akinyi19Abongo This is how women grow not men. Women date upwards always. A man wants younger women not older ones…

Marked as to-read: How to Date a Younger Man by Kendall Ryan

Kendall Ryan - How to Date a Younger Man Comments 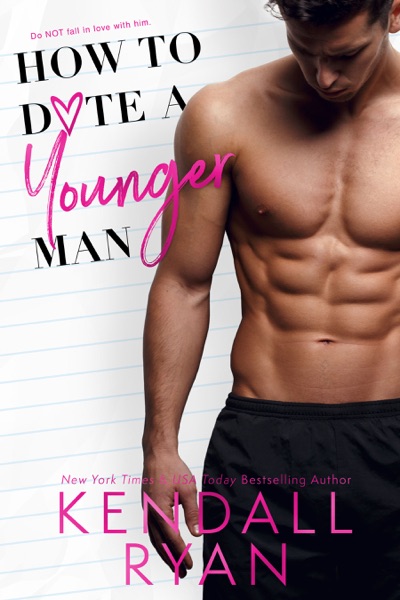 How to Date a Younger Man Synopsis