"[Moore’s] careful balance of the hard-bitten with the heartfelt is what elevates Long Bright River from entertaining page-turner to a book that makes you want to call someone you love.” – The New York Times Book Review

"This is police procedural and a thriller par excellence, one in which the city of Philadelphia itself is a character (think Boston and Mystic River). But it’s also a literary tale narrated by a strong woman with a richly drawn personal life – powerful and genre-defying.” – People

"A thoughtful, powerful novel by a writer who displays enormous compassion for her characters. Long Bright River is an outstanding crime novel… I absolutely loved it."
—Paula Hawkins, #1 New York Times-bestselling author of The Girl on the Train

Two sisters travel the same streets, though their lives couldn't be more different. Then one of them goes missing.

In a Philadelphia neighborhood rocked by the opioid crisis, two once-inseparable sisters find themselves at odds. One, Kacey, lives on the streets in the vise of addiction. The other, Mickey, walks those same blocks on her police beat. They don't speak anymore, but Mickey never stops worrying about her sibling.

Then Kacey disappears, suddenly, at the same time that a mysterious string of murders begins in Mickey's district, and Mickey becomes dangerously obsessed with finding the culprit--and her sister--before it's too late.

Alternating its present-day mystery with the story of the sisters' childhood and adolescence, Long Bright River is at once heart-pounding and heart-wrenching: a gripping suspense novel that is also a moving story of sisters, addiction, and the formidable ties that persist between place, family, and fate.

What a devastating and well described lifestyle these 2 sisters endured a year their very young mother becomes pregnant at 19. She is forced to marry him before Mickey, their 1st born arrives. Their gram allows the new young parents to live in her home and expects rent and food whenever they’re able to help Gigi out. Less than a year after giving birth to Mickey their mom is pregnant again. She and their Dad Daniel have very sporadic and secure jobs making money tight, tensions brutal and it isn’t long before her mother begins taking Oxus then heroin with their Dad. As horrible parents, fiercely addicted to heroin they are asked to leave due to their use. Their mom leaves and doesn’t leave a note, she doesn’t say goodbye she just disappears into the streets to get high as she physically is able. After several months of their mom not showing back into their lives the already volatile relationships between their Dad and Gigi erupt as often as they can muster. Finally their Dad moves out and they may have seen him 2 brief times after but never again after their mother overdosed and died. Gee couldn’t process her grief or get a grip on the very significant responsibilities it will be for her to raise 2 more girls, barely making meals each day. She ultimately curses the girls out, discourages them from furthering their education and mocks education as an elitist mindset and weakness. Kacey, her 2 yr younger than Micjeybhas been sexually actively, dealing drugs, doing drugs regularly and excessively and she hasn’t been to school in months. Mickey worries but she’s seen this movie- her sisters 1st OD was at 16. Their grandmother goes entirely ballistic when she dragged Kacey home and chastised her for living in her mothers wasted life. Mickey moves out of house, has begun a sexual relationship with the cop who was once her PAL counsel and for nearly 6 years he groomed Mickey to be his next conquest. Which she did become but not until she was 19 and during this time her sister Kacey had sobered up for an entire year in jail and mic invited her to stay. For months they have an amazing time reminiscing and catching up. Then almost 5 months after her release from prison mic came home unexpectedly and caught her sis using in her room. Her sis packed up and left. Worried about Lacey she mentions this to Simon her PAL peer who is significantly older than her and he uses these situations to control Mick and advance on Kacey. He gets her pregnant. Mick doesn’t believe it she believed Simon and then bc of her extensive and powerful use her child is born so severely addicted that it takes him twice as long as the other NICU to get himself into some relief. He was on morphine and barbiturates and it’s hard to watch. Kacey disappears to go her high and she shows up in hospital where she’s relinquished from her parental rights. Mick adopts Thomas whom she’s raised for. 5 years and the hell laden nights of screaming shaking and heart wrenching AGONIZING wails her nephew couldn’t help due to his EXTREME dependency. It took her almost 5 months to get him past the majority of the outwardly symptoms of withdrawals. It was also at this time that mick finds out Simon is her sisters baby daddy and she hires a lawyer preventing Kacey from having visits intless she passes test and she wants Simon to sign off his rights. All she wants is him to pay for his school. Eventually he stops doing that. Murders of several girls who work the street have been targeted and murdered and it is now she needs to find Kacey to ensure she’s alive. After help from Truman and as her suspicions go she is becoming distracted at work, gets suspended due to her unproductive month and is forced to spend time at home. She keepsnfrungbtonfing her sister but doesn’t until one day she discovers a last known address to her dad, even tho she’s been led to believe he’s been dead, she dares herself to wish. Sure enough it’s her dad. He has her sister she’s sober he’s helping her and plans to let her and the baby live with him and his new family. Her sis and dad seen so disappointed that she took custody of Thomas. Her sis feels she’s stolen him, she’s told the whole family and they all agreed she should give him back. But after 5 years Thomas is her son, he doesn’t even know Kacey is his bio mom. Now that she is pregnant again she had several family members cover for her and hide her for months bc she’s terrified someone will take this baby too Kept the pages turning, curiosity and intrigue on high alert and I wasn’t sure how she planned to wand this book though I was disappointed in the way it needed. I’d love a prelude

This is a good book about very troubling and sad issues that confront many people. Poverty, ignorance, hate, evil, and corruption are overwhelming but goodness, love and hope can prevail in spite of the odds. This book of fiction highlights the sad reality of every day lives of inner city residents trying to stay afloat in a sea of hopelessness. Shows the importance of family and forgiveness even in extreme cases. Not light or easy reading as my heart ached for Mickey and Kacey, and even Gee.

If it’s compared to girl on the train, I don’t want it. Pass

One of the best books I’ve read in a very long time. I finished it in a day. The ties of family and addiction...full of tragedy and full of love.

@abgutman: Long Bright River is about the overdose crisis in Kensington. I’m reading it anxiously. As some of you know, I’m very sensiti…

Long Bright River is about the overdose crisis in Kensington. I’m reading it anxiously. As some of you know, I’m ve…

If anyone’s interested: The first novel was Such a Fun Age by @kileyreid. Now I’m reading Long Bright River by…

5 of 5 stars to Long Bright River by Liz Moore

4 of 5 stars to Long Bright River by Liz Moore

5 of 5 stars to Long Bright River by Liz Moore

🌞-day means balcony time for George! Long Bright River has been one of the most-hyped books so far this year, and I… 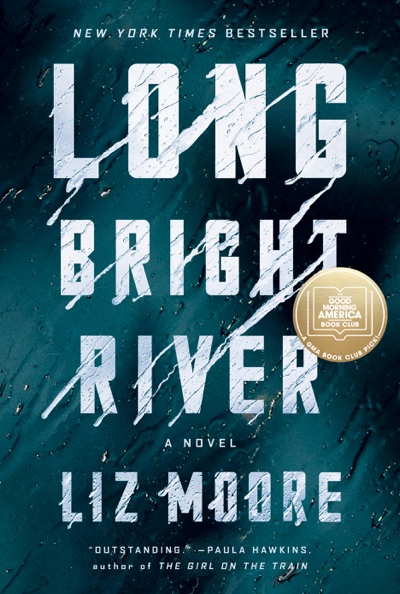