When Amos Decker and his FBI colleague Alex Jamison are called to London, North Dakota, they instantly sense that the thriving fracking town is ripe for trouble. The promise of a second gold rush has attracted an onslaught of newcomers all hoping for a windfall, and the community is growing faster than houses can be built. The sudden boom has also brought a slew of problems with it, including drugs, property crimes, prostitution -- and now murder.

Decker and Jamison are ordered to investigate the death of a young woman named Irene Cramer, whose body was expertly autopsied and then dumped in the open -- which is only the beginning of the oddities surrounding the case. As Decker and Jamison dig into Irene's life, they are shocked to discover that the woman who walked the streets by night as a prostitute was a teacher for a local religious sect by day -- a sect operating on land once owned by a mysterious government facility that looms over the entire community.

London is a town replete with ruthless business owners, shady government officials, and religious outsiders, all determined to keep their secrets from coming out. When other murders occur, Decker will need all of his extraordinary memory and detective skills, and the assistance of a surprising ally, to root out a killer and the forces behind Cramer's death. . . before the boom town explodes.

Good all the way through.....I love this series

not sucked into l chapter down - Walk the wire

Thanks for the reviews. Although desperate for a good book, I’ll take a bye on this one.

Wasn't my favorite!!!! Everything seemed too elementary and predictable.

Two separate groups , Amos Decker and Will Robbie unexpectedly meet in a mix of murders and international intrigue. One protects the other as they solve two separate connected cases. Good story lines. Got confused at times with all the character names intertwined. If bored at times, keep reading, it all comes out at the end.

BashfulCakes - It reads like a draft manuscript for a bad stage play.

Or the draft of a really bad screenplay. The story is so so. What really got to me was the writing. Too many “she glanced sharply at him”, “she gasped”, and much worse in between. I refuse to believe David Baldacci is the actual author of this book. I’ve loved every book in that series up til now. But I don’t think I’ll continue.

This book kept me wondering until the end!

bored to dearg - Quit writing if this is all that’s left!

An absurd plot made even worse by too many characters, too many murders, too many impossible escapes and numerous implausible scenarios. Total mishmash. A real bore.

Am book reader - Where did Amos go?

Was really looking forward to another Memory Man book, but he barely used his “superpowers “. Confusing plot, Jamison is a dimwit bulb and Robie and Reel pop in out of nowhere to save their butts. Loved the first memory man book but couldn’t finish this one, sorry to say.

I really like Decker a lot but this was my least favorite. It didn’t make any sense and three murder story lines that didn’t connect well. There were mistakes like it was rushed to print. Also, Decker didn’t use his “memory” until the end of the book. I like Decker because I don’t like the huge government conspiracy books. Not my favorite

ScubaDyer - Good book to read only if you’re housebound.

When I first began to read David Baldacci, starting with "Wish You Well" and subsequent thrillers, I felt I was reading literature. This book strikes me as having been written by a computer or by high school interns. It’s filled with short sentences in series and the increasingly frequent errors in the use of personal pronouns. I look forward to the day when Baldacci himself again assumes authorship.

I was looking forward to the next novel in the Decker/Jamison series and instead ended up with Will Robie. Not realistic.

Disappointing. Most Balducci novels push the boundaries of reality, but bringing in characters from other novels, with no connection, is just a marketing ploy. I couldn’t even finish the book.

Balducci has been going downhill for a while now. This book is really a mess. Throwing Robie and Reel into the mix made no sense. Write more Robie books if that is the intent. The Amos Decker character was really promising but the last two/three books have been meh. Jamison brings nothing to the table. Balducci’s other new character Atlee Pine so far has been a total fail.

Terrible! I rushed thru it to get to the end. The female FBI partner does nothing; she floats in space! I felt like he was trying too hard to put something out. Reads like a ghost writer! Disappointed.

costelow - BOOK TAKEN AWAY BEFORE I FINISHED IT!

I never got to finish this book. I was almost to the end but I could not get it to come back up. I paid for it so unfair! I don’t know who the killer was. I should get my money back.

I didn’t like the theme and the ending was weak

Walk the wire I traditionally love every thing this author publishes. This book is disappointing. The character development is non existent. It is as though the plot should force them forward, but unfortunately, The plot is convoluted and shallow. So follows the characters....Jamison is a flat character that adds no value. Adding Robbie and Jessica just further muddies the waters. Please do better.

Another five star winner for the author, but more importantly for his readers who've waited to continue this saga. Building slowly to a bombastic closure..., I dare you to put it down.

Excellent Storey Thought I was going to get lost, but the Storey came around and rapped up fine. Many thumbs up 👍🏿👍👍🏼👍🏽🙏

I’ve read most of this authors books this year. This newest book is showing the authors political side. Have it two stars for that. If the book is good I’ll change my rating. Only through chapter 3 now

tough to finish - Complicated and Convoluted

Looked forward to another Memory Man saga. Disappointed for the first time. Too complicated and convoluted. Too many plot points and characters. Two plots running simultaneously each with people and agendas. Hard to follow. SL 4/28

There is not a time limit for on how long it takes to read a book. Yes authors need to worry about how many pages will be in a printed version, but I don’t understand rushing an ending. Such detail throughout the book, then bam here are all of the answers in such short order that makes no sense.( don’t want to give the ending away)Not as good of a book as the other Memory Man series in my opinion.

I’ve read most of the author’s books. I’ve enjoyed them, but this one was way too long...with way too many plot twists...and incredulous [if not silly] events. Better luck next time.

This is another great book by this author. The book held my attention and kept me on edge until they end.

I usually love this author’s books, and have greatly enjoyed the Amos Decker and Alex Jamison books. This one seemed too long and convoluted, so I fast forwarded to the end, skipping large parts. Also did not really like adding Will Robie and Jessica to the mix. The dialogue seemed a little off, and the tutorial on fracking was really boring. Just too many characters and too many tangents.

@lilchurropdx Aerial rope and tightwire! I can still walk a wire because its kind of like walking a bike. Last year…

@Galleries1988: LAST ONE ALE! Pick up the final copy of this @BarryTheArtGuy print inspired by The Wire. Just $18. It’ll be gone soon.…

15% done with Walk the Wire, by David Baldacci

@EddieBarstool: The cocaine smuggling pilot - Barry Seal Would you take an assignment where you have to wear a wire on Pablo Escobar? @…

LAST ONE ALE! Pick up the final copy of this @BarryTheArtGuy print inspired by The Wire. Just $18. It’ll be gone…

@_DaveMelton For me the swab was nothing. I’ve had wire cameras shoved up my nose into my throat twice was I was yo…

@BiltonFlips You could walk for miles the wire was so long 😂😂😂😂😂

@EddieBarstool: The cocaine smuggling pilot - Barry Seal Would you take an assignment where you have to wear a wire on Pablo Escobar? @…

@VerdantCrewmate Jaune did notice the wire and made an effort to walk over, crouching down to the others feet. He's…

@errantruminant what a bummer! only thing to do is persevere. oh btw, put chicken wire on the ground around the tre… 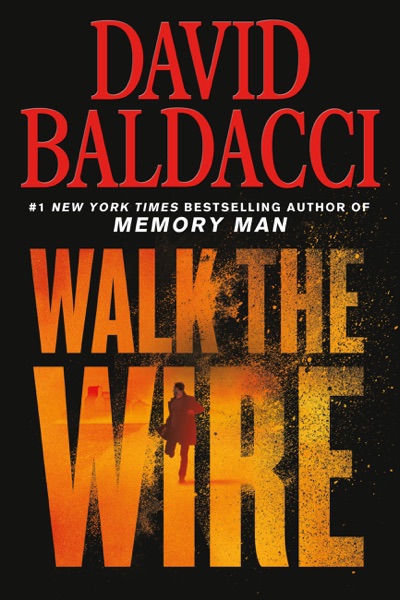