Say Yes to the Duke by Eloisa James Book Summary

Miss Viola Astley is so painfully shy that she’s horrified by the mere idea of dancing with a stranger; her upcoming London debut feels like a nightmare.

So she’s overjoyed to meet handsome, quiet vicar with no interest in polite society — but just when she catches his attention, her reputation is compromised by a duke.

Devin Lucas Augustus Elstan, Duke of Wynter, will stop at nothing to marry Viola, including marrying a woman whom he believes to be in love with another man.

A vicar, no less.

Viola has already said Yes to his proposal, but now he wants her unruly heart…and he won’t accept No for an answer.

rachael9379 - Not a COMPLETE waste of a Tuesday!

Hello all romance and period piece lovers! The characters were seemingly developed fully... just fully developed, very dull people. The circumstance that takes place in the beginning of this book, in which the book circumnavigated throughout, was rather trifling... I won’t disclose the contents of this novel, although I’d be saving many of you unnecessary expenditures. I will say the “romantic” scenes were decently written. And when I say decent, I most definitely mean indecent. Best reading wishes, Rachael.

Say Yes to the Duke is exactly what I needed this month! The story moves along nicely with relatable characters and lively plot development. Perfect book to sit outside with on a breezy day! Thank you Eloisa James-you provide a spot of cheer during dreary times!

I think what I enjoyed most about Say Yes to the Duke is it is a fun, less angsty book to read during this pandemic. Both the hero & heroine have emotional baggage. But through their love and affection they are able to slowly, believably work through those issues to end with HEA. I loved the bits of history and fashion that I always learn reading one of Eloisa James’ books. And Devin’s dad is the first hoarder I’ve read about in historical romance.

The only bad thing about this book is that it had to end! I enjoyed every word and turned every page with expectation.

I liked the characters but by the time the marriage came about I was so bored with the story that I didn’t finish it. I understand that a traumatic event occurred in Viola’s mind when she was younger and that Devin was the main antagonist of this trauma unbeknownst to either of them. But for the love of all that’s holy there has to be more to the premise of this story! One would think, anyway. Unfortunately one would be wrong. This book was simply not my style and not the enjoyable read I had been hoping for.

SFsueW - Say Yes To The Duke

Another delightful read by Ms. James!

LisanneH - They meet in the most distasteful way

The meet in the worst way. Viola, in her own house at her first ball and at the age of fifteen, had a traumatic meeting with Devin. He was publicly tupping his mistress. She never knew his name and he threw an epic rage, she developed an intense social anxiety for three or four years. Now, she’s a little older and at her debut ball meets Devin again, when he’s dismissing her and confirming all her worst fears about herself. In her own house. Devin is a duke with a traumatic upbringing. He’s big and austere. What I liked? They did have a good connection and chemistry and were a good match. And the extended closet scene. What I didn’t? That Devin was having sex with another woman and Viola witnessed it as a young teenager. This was dismissed too easily. That he thought of his mistress a lot and on his wedding day. That they too often recreated their original meeting only with Viola in place of the mistress (like all the time, including the closet with the slightly open door). Don’t get me wrong. I really liked this book, but there’s just a couple of things that didn’t sit well with me and really bugged me. I liked both Devin and Viola. Recommend.

I received an ARC of this book to read through Edelweiss+ in exchange for a fair review. Say Yes to the Duke is the fifth book in Eloisa James diverting series The Wildes of Lindow Castle. I think you will enjoy this book more if you have read the previous books in the series. Viola Astley became a Wilde as a small child when her mother married the Duke, and despite being completely embraced by the family, she has always felt just a bit out of place and has allowed gossip from society to wound her to the point where she becomes nauseated at the thought of spending time in society. Devan Lucas Augustus Elstan, the Duke of Wynter, has decided that it is time to take a bride and that Viola’s sister Joan is his choice. He expects that he just has to inform her father, and it will be done. Viola overhears a discussion between the duke and his uncle about his plans, and it infuriates her to the point where she forgets to be shy, and she lets the duke know in no uncertain terms that her sister will not marry him. Surprised and enchanted by the tiny spitfire who has taken him to task, he sets about to win her heart, no easy mission, as she believes that she’s in love with a vicar. I read this book in a day and enjoyed it so much I went back and re-read all my favourite parts. Watching Viola grow from shy mouse to confident and beloved duchess was a complete delight. Medium Steam. Publishing Date May 19, 2020. #SayYesToTheDuke #EloisaJames #EdelweissPlus #HistoricalRomance #GeorgianRomance #AvonBooks #HarperCollinsCanada #bookstagram

Finished Say Yes to the Duke by Eloisa James 😊

@SidlotteHEA: @FSanditon Just finished the new Eloisa James - Say Yes to the Duke. Have to figure out what to read next. Also going to s…

@SidlotteHEA: @FSanditon Just finished the new Eloisa James - Say Yes to the Duke. Have to figure out what to read next. Also going to s…

@FSanditon Just finished the new Eloisa James - Say Yes to the Duke. Have to figure out what to read next. Also goi…

@angelajames I tried to pre-order Eloisa James' "Say Yes to the Duke" at least three times.

This book broke my reading slump. It completely captured me. It somehow managed to be a new book that had all the c…

Check out Say Yes to Shakespeare (and a Duke): Author Eloisa James on Her New Book by Eloisa James via @BookBub 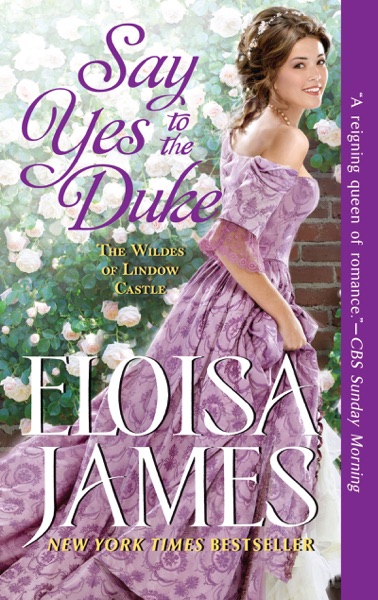 Say Yes to the Duke Synopsis