Take the ride of your life with the Torpedo Ink motorcycle club in this thrilling romance novel from #1 New York Times bestselling author Christine Feehan.

Torpedo Ink is Aleksei “Absinthe” Solokov’s whole life. They’re his brothers, his family—his everything. But that doesn't stop him from wanting something that only belongs to him. That’s why the tough biker has spent the last six weeks at the library, reading every book he can get his hands on and watching the prim and proper librarian who makes his blood rush.

For the past six weeks, Scarlet Foley has been fantasizing about the handsome, tattooed man whose eyes follow her every move. She senses he's dangerous. She wants him to get close enough to touch. She wishes she could let him know the real woman, not the one she pretends to be. But Scarlet has a plan to carry out, and she can’t afford any distractions.

Absinthe is well aware that Scarlet is hiding something. She’s a puzzle he intends to solve, piece by intoxicating piece….

I loved that Christine went is a whole new direction with this installment of Torpedo Ink. Some of the members of my book club couldn’t finish this book as the sexual overtones were not to their liking. I say, Bravo to Christine for pushing the envelope and writing a sizzling story for Absinthe and Scarlet! I LOVED this book, anxiously awaiting the next installment of Torpedo Ink!

I’ve read tons of Feehan’s books, but I had to return this one halfway through. No plot, just scenes of unrealistic smut. I must have been frowning the whole time...it was just so bad!

What....? That’s what I was thinking about half way through this book. I have read most of her books but couldn’t finish this one. It was a waste of money and time. I love a steamy romance novel as much as the next person but this was smut pure and simple. All I can say is “wow” and definitely not in a good way.

This series is for the serious reader who will take the time to understand the magical storyweaver of this author. This book plays an essential part in understanding all the Topedo Ink members and their bond. A reader needs to be invested in unraveling the whole story. Can't wait for the next book in the series. Wonderful, masterful storytelling.

I was so excited for this book. It starts off so good and interesting......... and Um wow just wow. I will probably never re-read this book. I could have done without it. It was okay. There were some parts that were really good. Some good insights into the other characters . But Some parts made you say , why?

I really love Ms Feehan’s older books. The characters were much more alive and her plots were not written around sex. With each book that comes out, I find myself hoping that my money was not wasted. I am sadly disappointed by this latest story and regret that I have purchased it. I have given up on the leopard series and now the Torpedo books. I am truly hoping her newest Carpathian novel is better.

3.75 stars--DESOLATION ROAD is the fourth instalment in Christine Feehan’s contemporary, adult TORPEDO INK erotic, paranormal romance series focusing on the men and women of the Torpedo Ink MC. This is Aleksei ‘Absinthe’ Solokov, and librarian Scarlet Foley’s story line. DESOLATION ROAD can be read as a stand alone without any difficulty. Any important information from the previous instalments is revealed where necessary. The TORPEDO INK series is a spin off from the author’s SEA HAVEN SERIES but you do not have to have read the original series to follow Torpedo Ink. NOTE: Most of the characters including Torpedo Ink club president Victor ‘Czar’ Prakenski, and his wife Blythe Daniels were introduced in the final instalment of the author’s Sea Haven Series BOUND TOGETHER. WARNING: DESOLATION ROAD contains scenes, and makes reference to voyeurism, graphic violence, rape, murder, torture, child prostitution, and abuse against children, women and men. There are also scenes of animal role play, food play, anal play and the use of other items during sexual activities and therefore, Desolation Road may not be suitable for more sensitive readers. The eighteen original Torpedo Ink members are the sole survivors of a Russian pedophile ring, and as such work towards rescuing children and women in similar situations. Told from several third person perspectives including Absinthe and Scarlet DESOLATION ROAD follows Torpedo Ink’s Aleksei ‘Absinthe’ Solokov as his need for librarian Scarlet Foley helps calm the demons that continually run through his head. For six weeks Absinthe has ‘stalked’ our storyline heroine in an effort to get to ‘know’ the woman that calms the beast but Scarlet Foley is so much more than a sexy librarian, Scarlet is not without some supernatural abilities of her own. Years earlier, a horrific attack against Scarlet, and ultimately her sister Priscilla, led to the loss of Scarlet’s entire family, and in the ensuing years, Scarlet swore vengeance against everyone involved but meeting Aleksei Solokov meant Scarlet was about to place the Torpedo Ink family in danger, a danger the family was certain did not apply. What ensues is the quick building romance and relationship between Absinthe and Scarlet, and the potential fall-out as Scarlet’s past is determined to finish the job. At seventeen years of age, Scarlet Foley lost everything including her innocence, her family and the life she once knew. Years would pass wherein our heroine made preparations to enact revenge against the men who destroyed our heroine’s life, preparations that will now involve the men and women of Torpedo Ink. Aleksei ‘Absinthe’ Solokov struggles with demons, the memories, and the PTSD of a time long ago. With the ability to ‘see’ into the mind of the people he loves, Absinthe is empathic about the pain, the suffering, and the horrendous acts that no child should have ever been exposed but it is the guilt of so many losses that continue to pull Absinthe into the abyss. The relationship between Absinthe and Scarlet is one of immediate attraction; a highly sexual, demanding, intense role playing relationship in which the independent, strong willed and determined Scarlet Avery quickly bends to the will of the man that she loves. As per my warning, Desolation Road contains scenes of animal role play, food play, anal play, and the use of items not necessarily designed for sexual activity. There is a large ensemble cast of colorful, broken and determined secondary and supporting characters including most of the Torpedo Ink family of survivors, who endured but barely survived years of torture, abuse and rape of the body, mind and soul. As per my previous reviews, I have remarked on the author’s increasing violent story lines and abuse against men, women and children but in the case of the Torpedo Ink series, the violence is part of their history and lives-ingrained and imbedded –into their very existence, but their need for vengeance is as equally violent and abusive towards their intended victim-eye for an eye and so on. Like the previous instalments, DESOLATION ROAD focuses on the graphically detailed violence, abuse and rape, the sexual torture of children, and in this, I believe the author is going for shock value as opposed to dramatic affect. There is plenty of redundancy and repetition, leading to more fluff (albeit graphic) than substance. At times, the writing style flips as though there is more than one ‘person’ writing the book. DESOLATION ROAD is a story of family, friendships, betrayal and revenge; of survival and loss; of heart break and love. The premise is dark, haunting and gritty; the romance is tragic and intense.

3 of 5 stars to Desolation Road by Christine Feehan

@IgataLawrence @ipannigeria @MBuhari this road led to my town, am very happy to hear this news. after so many years…

@paul260464 @Jo_Earlsfield Not sure that expression is entirely appropriate, given the desolation that COVID and th…

We need him @JustinTrudeau as our leader!! Our President @realDonaldTrump has taken us down the road of desolation…

🏍 #BookReview Desolation Road by Christine Feehan is dark and twisty!

@Mr_Kotter I totally know what you mean. The single player is almost designed to force you to stop and smell the ro…

3 of 5 stars to Desolation Road by Christine Feehan

Someone has to do the #hard #work. Someone needs to have the #discipline. Not everyone can be the self #serving…

Have you heard ‘Desolation Road’ by Audio Shyne on #SoundCloud? #np 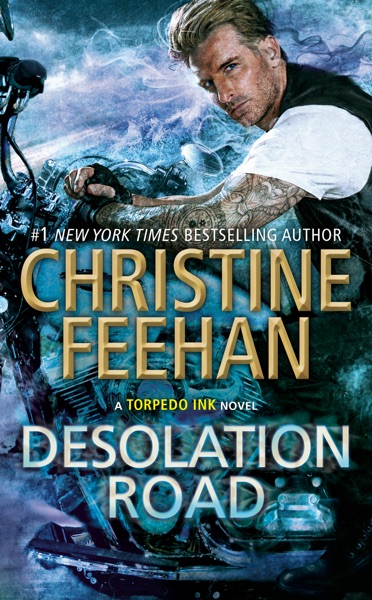