He needs a wife. She needs a paycheck. But neither expect the heat in their marriage of convenience.

No one puts CEO Jack Sutton in a corner, not even his mother… or her will. If he wants his inheritance, he needs to be married, but no one said the marriage had to be anything other than a business arrangement. There are plenty of willing women, and they’ll play by the rules: stick to the script and don’t fall in love. He only has to find one in time. Too bad he only left himself a few hours.

Kelly Bradley made it into the law school of her dreams, but she has no way to pay and the tuition deadline is fast approaching. Marrying a billionaire might be a bit drastic, but spending one year on his arm will make all her problems go away… if she can keep her heart in check. That’s never been a problem in the past.

It’s a business arrangement, but when one thing leads to another will Jack be able to let Kelly go? Or can he find a way to renegotiate the deal of his life?

This is a standalone book in the Sutton Billionaires Series. A shorter version of this book was previously published in the Sutton Capital Series.

Really enjoyed the book. I like that there as a twist

A wonderful storyline and a wonderful way to keep my interest on the whole story. And thank you for keeping it clean! Thanks, JK

It was a nice story. I liked the way their feelings for each other developed. I will be reading the next one.

Crazy not lazy - The Billionaire Deal

Good. It was refreshing the author didn’t stop and continue before rescuing Kelly.

I couldn’t read past the first couple of chapters, it was so aweful.

This book had me in stitches in the beginning. I have not yet encountered a book that had me laughing to the point my dad asks if I am okay. The character development was real and I feel in love with Kelley. I love it when I can see myself in a character through their quirky phases and nuances. Although the story seemed rush towards the end and in the middle I still give it a 5 because of the rawness in the conversation. I would have loved to see more character develpment and refinement in Kelly’s role…I am sure it would have been hilarious if Kelley confessed to Jack

Book was predictable until it wasn't. Liked the unexpected intrigue. Will look for more from Lori Ryan in the future.

Started out as a quarantine read. I liked the characters; Kelly comes across as a real person. 3 stars dragged a bit and I started skimming sex scenes. Ending felt a bit rushed. Will not read next in series. Good book to kill a few hours.

I have read the entire Sutton Capital series by this author and enjoyed it immensely. This book is an extended version of Legal Ease, the first book in the series. It has new content which further develops the characters and plot. While it is the first book in the series, it does not have a cliffhanger ending and stands alone. It is written in third person. Jack Sutton is a very busy man running the successful venture capital business his grandfather began. As the CEO, Jack is a workaholic and likes to control everyone, and everything, as much as he possibly can. He is approaching his 30th birthday and, because of a marriage clause in his mom’s will, he has to be married or will lose his company. Kelly Bradley has worked hard to complete her undergraduate education. She even got accepted into the law school of her dreams but, when her financial aid falls through, she doesn’t see how she can accept admission. When her friend tells her of Jack’s marriage clause, Kelly sees the answer to both of their problems. If she marries Jack, he can pay for her law school tuition. It’s the perfect solution—an iron-clad prenup, a marriage in name only and, at the end of one year, they quietly divorce and go their separate ways. However, Jack’s mean, conniving, meddling Aunt Mabry suspects the marriage is fake and sets out to prove it so she can take over Sutton Capital. Neither Jack nor Kelly expected the ensuing events, expectations and feelings that interfere with their strictly business deal. When Kelly is in danger, Jack races to rescue her before they lose what have found with each other. Overall, I thoroughly enjoyed this book. The complex characters, conflicts and ultimate resolutions were engaging, and the plot pacing was perfect to keep the sexual tension and peril suspense high. I thought Aunt Mabry’s transformation was a little too abrupt to be believed, or accepted, but I always appreciate character growth and redemption as the story moves along. If you like romantic suspense and intriguing plots, you will not be disappointed in The Billionaire Deal!

Bonnie579 - Fantastic. Superb. Great storytelling and great storyline. You will love it.

Fantastic. Superb. Great storytelling and great storyline. You will love it.  Jack is CEO of Sutton Capital, but his aunt is trying to oust him and put her son in as CEO.  The only way to stop it? He can get his mothers shares if he is married before his 35th birthday which is next week.  Enter Kelly, the beautiful stranger who walks into Jack’s office and announces that she is his fiancé with a sticky note that says one year of marriage for $154,000 so she can go to law school.  It’s a win win for both of them.  This way he can stay as CEO and get his mother’s shares and keep his company. Jack has no idea who Kelly is or how she found out that he had to get married, but they are pulling it off magnificently. Only one little drawback. Kelly is starting to fall in love with Jack.  What is she going to do when the year is up and has to go back to her normal life, and she has fallen so hard and completely in love with Jack.   Is he just in it for the year to keep his company or does he have feelings for her too?  But neither say it until something drastic happens to Kelly and Jack realizes he cannot live without her. That he wants her forever. I loved this book. Jack is such a gentleman and treats her so tenderly that there’s no way that she can’t know that he’s in love with her.    This book is so beautifully and lovingly  written . You will not be able to put it down. Kelly is like the girl next-door and nothing like any of the women that Jack dates, movie stars, models. She is exactly the kind of woman that Jack’s parents would have approved of. All Jack wants is to have a marriage like his parents who loved each other until the day they died. Can he have that with Kelly? Or will she leave after a year and she’s only in it for the money? You will have to read this book to find out. And you will love the ending.  

ARC for honest review with no compensation The Billionaire Deal is book 1 in the Sutton Billionaires series by Lori Ryan. I read the shorter version of this story years ago as the Sutton Capital series. Loved it then and love this extended version even more!! Jack Sutton, CEO of his family’s company Sutton Capital has to find a wife before his 35th birthday in a few days or his will lose control of the company per his mother’s will. Problem is where will he find a woman to marry on short notice, divorce in a year,sign a prenup and not be after his billions... Kelly Bradley need to find a way to pay for school after he financial aid fall through as she was just accepted into Yale. When she meets her friend Jennie (who works as a temp for Jack and has been listening to his private conversations on a broken intercom explains Jack needs a temporary wife) Kelly may have found it her way to pay for school. Nail biting suspense, steamy romance, laughter, friendship, mystery, fake marriage or is it combines to make this an edge of your seat reading!

OnlyStreams - Not worth your time or money

Rare for me to stop mid-book, just not in my nature - even when a story isn’t great I’m curious to see if it gets better and where the plot leads. But this is truly awful.. there’s no character development and they are inconsistent without explanation. No build up or logical progression of events, just sudden happenings. I only got halfway through (after skim reading the prior few pages) before I had to admit it simply wasn’t worth the next hour of my life, and I didn’t care at all what happened to the names on the pages.

The story is good

Great book, couldn’t put it down so I read it in a day! Great characters and a twisting plot to keep you engaged, loved it!

Starts off well then suddenly extra twists and turns are added to a point beyond credulity.

Great book, could not put it down, onto the next one now :)

Throughly enjoyed, read it in a day.

This book had a good balance of romance, comedy and suspense in it. However, I will say that the ending was very abrupt and lead the book so be very anticlimactic which was a shame.

Great book!. Hot and steamy but also some suspense and intrigue.

@CRITICALDIAMOND: Thanks everyone for the Congrats about the Record Deal from Big Legends as well, so many 🙏. Vids and pics coming. My P…

@diphola_com @ThushanangF @NMzozoyane Im struggling to understand why this is offending . She posted herbal life an…

Big win for Len Blavatnik on $WMG "The deal could reap up to $2bn for Ukrainian-born billionaire Len Blavatnik...…

@campbellclaret He. Is. Doing. The. Job. A no deal Brexit to hand even more money, assets and power to far right mu…

@CynthiaDRitchie Look who's back in town, the billionaire "Bahu" of PMLN. Hopefully your Deal with Dar matured 🧐

4 of 5 stars to The Billionaire Deal by Lori Ryan 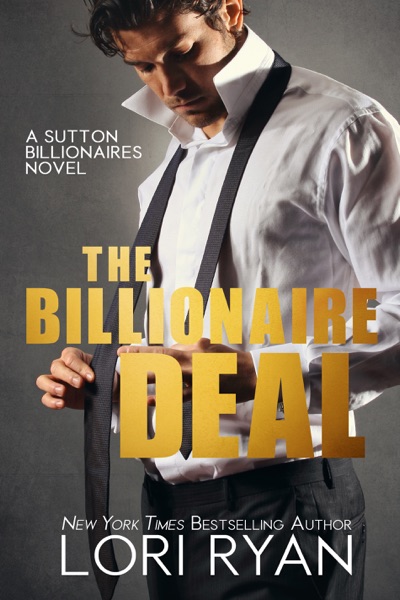