Published: 18 August 2020Book Score: 0/5This book hasn't received any reviews and votes yet!

When mixologist Pepper Revelle joins the Bohemia Bartenders for what promises to be an entertaining, rum-soaked tiki convention in sultry South Florida, she expects divine ukuleles, sublime swizzles and a chance to know chief bartender Neil a little better. What she gets is chaos — the death of a high-profile rum collector, a cast of sneaky suspects and ten thousand limes to squeeze.

With one of their own under suspicion, Pepper and Neil set out to find the real killer. But behind the aloha shirts and cocktail parasols is a blender full of secrets. The centerpiece of the convention is a high-dollar tasting of rums that survived a shipwreck and other disasters, and when a precious bottle vanishes from the crime scene, everyone with a ticket is a suspect.

As Pepper tries to keep the insatiable crowd inebriated and her gregarious dog Astra sober, she finds peril under every palm tree. It seems like everybody’s guilty of something. But who’s guilty of murder? And can she and Neil find the culprit before they’re smacked like the mint in a Mai Tai?

Wrecked by Rum is the second book in the Bohemia Bartenders Mysteries, funny whodunits with a dash of romance set in a convivial collective of cocktail lovers, eccentrics and mixologists. These quasi-cozy culinary comedies contain a hint of heat, a splash of cursing and shots of laughter, served over hand-carved ice. 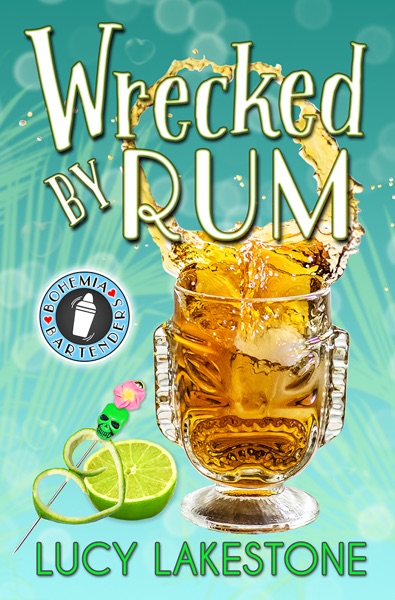