Pru Kilcannon has one goal when she wakes on Christmas Eve – to perform the most “Random Acts of Christmas Kindness” so she can spread cheer and ensure her high school wins the county-wide “RACK IT UP” contest. But when her friends decide to team up with their boyfriends, the ever-helpful Dogmothers enlist the new kid in school as Pru’s partner for the contest. And that means good-girl Pru has to spend the entire day with the broody, moody, and crazy cute bad boy Lucas Darling, and his chaos-causing greyhound, Tor.

As if that wasn’t enough holiday havoc, Pru and Lucas have to accompany the grannies on a secret mission to check out a man Yiayia has met on an online dating service. Gramma Finnie is convinced Aldo Fiore is a mobster, Yiayia thinks he’s her dream man, and Pru just wants to be sure her great-grandmothers don’t get themselves arrested — or worse. There’s no telling what could happen when the Dogmothers spy on an eighty-year-old who might be playing a rather flirtatious Santa at the mall…or might be hiding from the Feds.

But no one expected the real trouble to come from Tor, the former racing dog who causes mayhem and mall madness. As Pru and Lucas attempt to control Tor, supervise the Santa Stalking, and knock out a few random acts of kindness…they also give in to a delicious little Christmas crush that just might lead to some magic under the mistletoe this year!

The Dogmothers – A Spinoff Series from the popular "Dogfather" books

Fall in love over and over again as two charming and hilarious grandmothers and their precious doxies make it their mission to matchmake all nine of their grandchildren in spectacular, unforgettable, and heartwarming fashion.

About Roxanne St. Claire
Published since 2003, Roxanne St. Claire is a New York Times and USA Today bestselling author of nearly sixty romance and suspense novels. She has written several popular series, including The Dogfather, The Dogmothers, Barefoot Bay, the Guardian Angelinos, and the Bullet Catchers. Several of her books have been optioned for film and many have been translated into dozens of languages. In addition to being a ten-time nominee and one-time winner of the prestigious RITA Award for the best in romance writing, Roxanne has won the National Readers' Choice Award four times, as well as dozens of other writing and industry awards. A frequent and popular national speaker on the subject of writing and the writer's life, Roxanne is a graduate of UCLA, the mother of two, and recent empty-nester. She lives on the east coast of Florida with her husband and two (at the moment) dogs.

On the second day before Christmas my admin gave to me: crazy sock day! My crazy holiday socks say feliz naughty do…

Little does he know, he’s getting coal for Christmas. Feliz Naughty Dog! 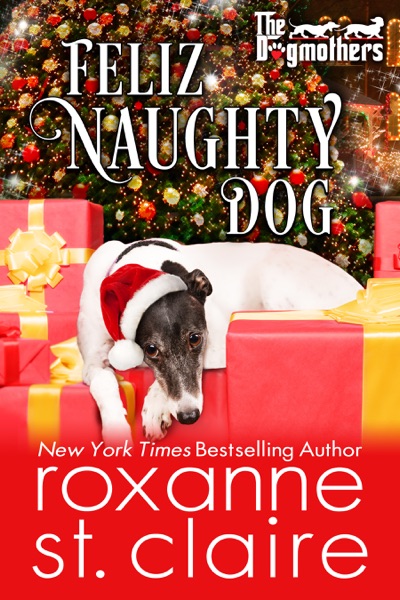