“My favorite historical novel . . . a superb re-creation of the Battle of Gettysburg, but its real importance is its insight into what the war was about, and what it meant.”—James M. McPherson

In the four most bloody and courageous days of our nation’s history, two armies fought for two conflicting dreams. One dreamed of freedom, the other of a way of life. Far more than rifles and bullets were carried into battle. There were memories. There were promises. There was love. And far more than men fell on those Pennsylvania fields. Bright futures, untested innocence, and pristine beauty were also the casualties of war. Michael Shaara’s Pulitzer Prize–winning masterpiece is unique, sweeping, unforgettable—the dramatic story of the battleground for America’s destiny.

BONUS: This edition includes an excerpt from Jeff Shaara's Blaze of Glory.

This is my third reading of this wonderful book. It is without a doubt one of the best books written about the Civil War! In my opinion Michael Shaara captured the glory and horror of war. It also gives some insight into the individuals as they see things happen in front of them. An extremely well written story.

This book is a very good book to read. The book is set in the Battle of Gettysburg which is w Civil War battle that occurred in the middle of the Civil War. What is is very neat about this book is that it shows different POVs of different military officials throughout the battle. I would highly recommend this book for anyone who loves history or military history because this would be the kind of book that a historian or history buff would read.

6 stars! Being a civil war expert myself, I tried to look for flaws in this book. None were found. Extremely accurate, and i like how it's written as a novel. I also like how its from both points of view, not just union. It seems like no one cared about the Confederates, but they had lives too. Great book, worth all 8 bucks. Watch the movie "Gettysburg". Its based off the book and closer to the book than even Hunger Games was to it's book.

Well I am not too much into war books or anything but I had to read this book for summer reading. I will say this book was phenomenal.

Jeff k85 - The most noble of all battles

Amazing book. You have to take some time remembering all the characters. But it puts light on exactly how the battle of Gettysburg took place, How the enemies knew one another, and how it was inevitable that neither side was going to give up till the end.

Novaxman - A look inside the war

This was a very interesting book to read. It was very enjoying. It gave me a new understanding of how the civil war was in prospective of a soldier. What honorable men they were.

Awesome! Could not put it down, literally. Goes inside the battle, but more, inside the minds of the key generals. Talks of God, honor, death, war, admiration and friendship of the deepest kind. The fog of war, valor, fear, stench, stupidity, luck, uncertainty of information, responsibility of command, foppish sentimentality, terrified religiosity, uncommon bravery, blooming pride and booming cannon are all here. I wish I had read this book years ago. I wish every puffed up self-congratulating politician who may see political opportunity in pitting brother against brother would read this first and beg forgiveness. Are we all red meat - killer angels. Or something more?

An outstanding read. I do wish there was more from the Union side, as most of the story is from the Confederate angle. Still, a gripping read.

Well written and a true account of our Civil War History.

I hate this book sooooo much but I have to read it for English class. Its so bad I'll read a chap and not understand ANY of it. Do not read unless u absolutely love history or HAVE to read it.

Excellent reading. Unable to put down.

I've never taken much interest in this time period, but found this story very compelling. This book has many accolades and it's easy to see why. This story brings the realization of what it must feel like for people of any generation to have to face the ones you love on the battlefield and what it would feel like to live with that for the rest of your days.

A story of a battle that shaped a nation not from a tactical view but the human point of view. This book brings you into the troops campfires, you will feel the heat and the pain. No other civil war book will bring you closer to understanding how the Americans on both side fought, felt and died for one country.

the great doors open to black eternity, the rising across the terrible field of that last enormous, unanswerable qu…

@BethHildenbrand: Cain is here and he has brought He'll with him. In the war between Angels and Demons the Heretic Son is the key. The f…

@MichaelLRoss7 The Killer Angels, Gods and Generals, and Last Full Measure were phenomenal. I’ll have to check out your book sometime soon!

@BethHildenbrand: Cain is here and he has brought He'll with him. In the war between Angels and Demons the Heretic Son is the key. The f…

@OwnTheLibsBot: Rereading "The Killer Angels" to own the libs

Rereading "The Killer Angels" to own the libs

@_killby_ The cellar is about a serial killer who has like ocd . The fallen series is a cool take on the devil and…

2) The Killer Angels by Michael Shaara

@j_lau326 Yes, the Killer Angels is my all time favorite book outside the fantasy genre. I’ve never seen this full version before

Cain is here and he has brought He'll with him. In the war between Angels and Demons the Heretic Son is the key. Th… 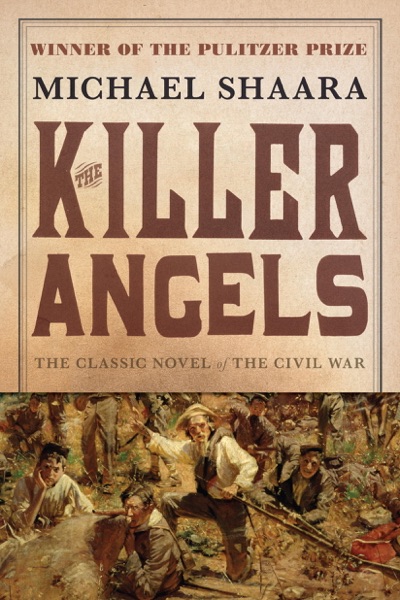