It’s tourist season in Paradise, Massachusetts. With it comes a baffling and violent crime wave that has residents on edge. It’s also brought a mysterious figure who’s stirring up troubling memories for Chief of Police Jesse Stone—especially when it appears the stranger is out for revenge.

Excellent Parkeresque yarn. Style is almost Parker himself. Five stars all the way.

Really enjoyed this book. Certainly fast moving. Jessie is one of my favorite characters and this tome does him justice. Will read more.

This is Robert Parker's last book, and maybe his best. He has a tough but basically very moral cop, Jesse as his hero, and makes me want to join the force. For anyone that lives in Massachusetts, Parker books have the extra charm of being in familiar territory. I probably won't join the force. Tom Reed, Barre, Mass

Was a fun read. Nice escape from life's regular routine. The characters basically felt like Parker's so I easily fell into the book's routine- hopefully there will be more to follow.

Love the fast pace.great job Robert Parker. Have read all the Jesse Stone books. Can't wait for the next one.

Rates high, right up there with all the rest of Parker's Jesse Stone novels. Fun and a real page turner.

DesertAries - It's not Robert B Parker, but it's entertainment

Ironically, it was Robert B. Parker who finished Raymond Chandler's "Poodle Springs," and then penned an original sequel to "The Big Sleep," "Perchance to Dream." Now Michael Brandman returns the favor with a Jesse Stone novel. It's not bad, but it's not Parker. Carrying Parker's name, it will sell well, but Brandman could have created his own character and the book would have been stronger. His personal style seems cramped trying to fit it into Parker's Jesse Stone. The slight expansiveness of the Stone character beyond Parker's outline seemed to hang like unwashed jeans; didn't quite fit yet, hung a little loose, and was just a little too shiny. "Poodle Springs" was seamlessly written from Chandler's original four chapters. "Perchance to Dream" was a little too Spenser as Marlowe. I don't know if this novel had Parker-written chapters or outline, but it did not carry the master's staccato-elegant voice. It's worth the read, but you might consider the library your reading option. I don't, however, regret buying it and placing it on the shelf next to the originals.

I purchased "Killing the Blues" with some trepidation. I have been a great admirer of Robert B. Parker's writing for many years. His writing style, his characters, and their development have always been enjoyable to me. I was greatly saddened by his passing and thought that was the last I'd see of the writing I so much enjoy. But, I have just now finished "Killing the Blues", written by Mr. Brandman, and like all of Parker's novels, I could not put it down. He has captured Jesse Stone's persona perfectly, plus Molly, Suitcase, and other recurring characters. I hope that this new novel will be the beginning of a continuation of the writing style of one of America's greatest mystery writers. Thank you so very much! John Almeida Altamonte Springs, FL

Great story! Excellent writing style and in the spirit of Robert, a friend of mine. I'm glad they are coming alive again!

Producer11 - Not by Robert Parker

Don't know who this author is but he can't write or think like Parker did. I feel robbed of my three dimensional characters which have the same names but who are just 2D facsimiles. Don't buy this book. It is a sham and a scheme to make money off a dead author's great name. Shame on you people!

Once again, a fun Robert Parker book. Love the banter of the characters. Never a disappointing read. He will be missed!!!!

Parker did it again. Can't wait for Tom Selleck to make it a movie!

A nice read...true to the main lead people in Robert Parker's series...a different writing style but very enjoyable...I look forward to more books in this series

I had been despondent since the passing last year of Robert Parker- and that loss was magnified by the knowledge that we were losing not only him, but all his great characters: Spenser, Sonny, Jesse ..... But take heart: Robert B Parker's Killing the Blues is a novel Parker would be proud of and the fans of Paradise will embrace like a home coming.....I did! Good story line and dialog feels like home....,I eagerly await the next! 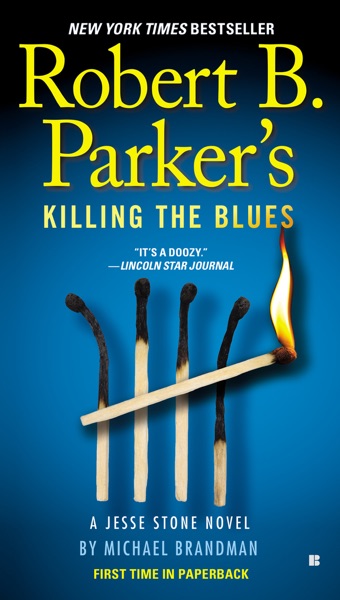