Frank Herbert’s classic masterpiece—a triumph of the imagination and one of the bestselling science fiction novels of all time.

Set on the desert planet Arrakis, Dune is the story of the boy Paul Atreides, heir to a noble family tasked with ruling an inhospitable world where the only thing of value is the “spice” melange, a drug capable of extending life and enhancing consciousness. Coveted across the known universe, melange is a prize worth killing for....

When House Atreides is betrayed, the destruction of Paul’s family will set the boy on a journey toward a destiny greater than he could ever have imagined. And as he evolves into the mysterious man known as Muad’Dib, he will bring to fruition humankind’s most ancient and unattainable dream.

A stunning blend of adventure and mysticism, environmentalism and politics, Dune won the first Nebula Award, shared the Hugo Award, and formed the basis of what is undoubtedly the grandest epic in science fiction.

Truly a must read piece of literature. If anyone can adapt this book, it’s gonna be Denis Villeneuve.

A brilliant concept and even better story telling. This tale of young Paul growing into the leader that he denies is compelling. Every characters’ story drives the plot and the world building is glorious. So glad I picked this up. Masterful.

A classic Sci-fi story that helped inspired many other Sci-fi classics, like Star Wars & Terminator. It can be a bit intimidating of a read at first. However, if you stick with it, the story will reward you for it. The characters are well done and the philosophy of Dune is so intriguing. If you're a Sci-fi fan, read this.

S. Hutapea - Worth every minute

This was the longest book I’ve read so far yet it held my attention the entire time. Frank Herbert’s writing style gave mundane scenes depth. 10/10

I am so torn by Dune. A sprawling space saga that artfully weaves religion, love, war, death, politics, and fantasy. That are some aspects that have not aged well, at least for me. I could do without the heavily patriarchal tone and the white savior narrative. Aside from those modern resentments, the story is gripping and perplexing at the same time. With every page I am either unable to pull away or reluctant to turn the page in fearful anticipation of of doom played out on the following pages. I see now why Frank Herbert’s magnum opus is celebrated as one of the cornerstone’s of Science Fiction. A story as old as time of betrayal, conflict, love, and triumph is given new life by the setting that becomes a character in it’s own way. The thread of a unforgiving landscape that bends all to it’s will, pairs nicely with the fire of destiny that will not be tamped down of Paul’s journey to becoming the legend Maud’Dib. It is easier to see how this pairing of space, destiny, mystical powers, and lineage could inspire so many pop-culture films and works that came after it. I said I was torn by Dune, because it is truly a great story, and well written. But all the while, something felt missing or there was a desire to pull it forward. In my own mind rewriting plot lines and characters to fit a modern lens. Science fiction for me has always been a carnival house mirror reflecting the failings and potential pitfalls of current man as represented in his future. In Dune, the one relevant judgment on current man that I find most concurrent with today, is the danger of fervent religious fanaticism. Herbert was spot on in waning that “When religion and politics ride the same cart, “the riders believe nothing can stand in their way.”

The bones of the story - the characters, plot, and ideas - are superb. The dynamics and complexities are truly masterful. And the novel teaches too. I have heard that many shy away from DUNE because of the page length, the exotic words and phrases that bunch up at the beginning and go unexplained intially, and the way in which the story and characters depart from traditional versions of sci-fi and the hero’s journey. Once read, I think DUNE will prove itself to be expressed very near to perfection. Underdstanding is not as important as experiencing, and what is not understood initially is either revealed in unfolding, developing intrigue or is left to dramatic mystery. The departues from traditional sci-fi and the classic heroic tales are pianful and tragic, but they express important human truth, and those feelings are extaordianry, owing that you’re simply reading fiction on a piece of paper or e-paper. I think DUNE is important reading, and it’s thrilling too.

That was definitely one hell of a read! I’ve always wanted to read Dune, but was always put off from how daunting it sounded. But with the new film coming out, and my interest in wanting to watch David Lynch’s original, I decided having known the context of the book would help. So I decided to attack, after waiting a year after receiving a copy, and I can happily report it was worth it! Dune is about Paul and his life on a new planet, after his family has been granted rule of it. When reading the book, the first thing that alarms you is how much of a world is built around the story, that the terminology may throw you off at times. There is a dictionary in the back, but I feel as you you get though the first few chapters, everything that is important is revealed through context, or a quick travel to the back of the book. By the second part of the book, I didn’t really look through the back. The story is very interesting and I was immersed in the world of Arrakis, and the people that lived on it. You can definitely see where many stories of now have taken inspiration, and the biggest faults I could give the book is the fact that you may read plot points that we’ve seen done before, but that is usually what happens when you read a classic after many years of it being out. Either way, I would definitely recommend you read it!

I read Dune about a year ago, and in all honesty it was one of the best sci-fi books I’d ever read. I just love how Frank Herberts write and fills his stories with emotion. It was truly an amazing experience. I would recommend Dune to anyone.

I kept waiting for something big to happen - it never did. The map is blurry; it needs to be reformatedf for clarity. I may attempt to read the entire Dune Chronicles, but it does not look good based on the first book. Dune had too much mysticism, and not enough action.

I remember reading this when it first was published (Way back in 1990 when there were still ‘Sci-Fi Book Clubs’). Frank Herbert combines serious social issues with a fascinating new world/universe. The movie was also great-but was unfortunately panned by critics. (It’s gotta❤️Sting!)

At first the book seems to be slow, but it lays the groundwork for you to be transported to a whole different world. It is amazing how it has different layers of politics, ecology and tradition that totally engulfs the reader. It is qutie fascinating. A must read

Don’t let anyone tell you that this book is not amazing.

NotBrightEnough - Such a 60's book

Best read while stoned so you don't recognize how plodding, uninteresting, and transparent it is. This could only have been a best seller in the 60's. Far out dude!

If not the the best Science Fiction novel ever written, undoubtedly one of the best. Frank Herbert turns religion, ecology, mysticism, politics, power and greed all on their collective ears. The characters are powerfully intelligent and the plot is forever changing and broad in it's scope. Was Mr. Herbert on the spice when he wrote this? Absolutely amazing.

The absolute best. Read it. Now.

This novel totally transcends the science fiction genre. I'm not even sure how to describe it. Maybe a cautionary coming-of-age-ecological-Messianic drama? Think "I, Claudius" mixed with "Star Wars," and a lot of T.E. Lawrence. Am looking forward to the second book.

One of the best. The politics and ecology are timely no matter when this book is read, today, or 100 years from now.

Eddie the Head - The greatest

Simply put, Dune is not only the single greatest achievement in science fiction writing of all time, but also the inspiration for Star Wars, and manages to be a critique of monotheistic religions and the concept of messiahs. This book, and its subsequent sequels are masterpieces, and you're doing yourself a disservice if you haven't read them.

@aniceburrito: Seeing a lot of talk of “dune sandworm” but not much of “darude sandstorm”. See the problem?

What do you think about Dune: Frank Herbert book? Ask the bookpedia.co community a question about Dune! 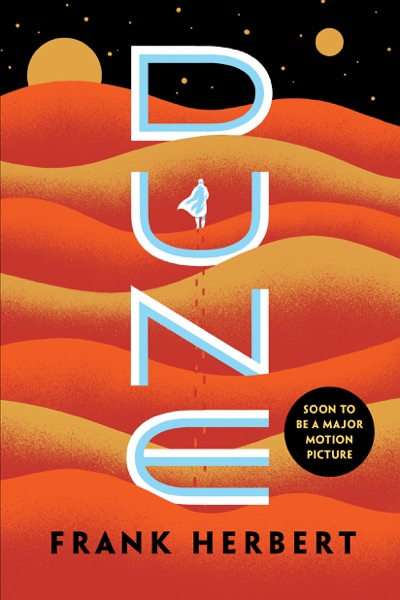