The Last Jews in Berlin by Leonard Gross Book Summary

When Adolf Hitler came to power in 1933, approximately one hundred sixty thousand Jews called Berlin home. By 1943 less than five thousand remained in the nation’s capital, the epicenter of Nazism, and by the end of the war, that number had dwindled to one thousand. All the others had died in air raids, starved to death, committed suicide, or been shipped off to the death camps.

In this captivating and harrowing book, Leonard Gross details the real-life stories of a dozen Jewish men and women who spent the final twenty-seven months of World War II underground, hiding in plain sight, defying both the Gestapo and, even worse, Jewish “catchers” ready to report them to the Nazis in order to avoid the gas chambers themselves. A teenage orphan, a black-market jewel trader, a stylish young designer, and a progressive intellectual were among the few who managed to survive. Through their own resourcefulness, bravery, and at times, sheer luck, these Jews managed to evade the tragic fates of so many others.

Gross has woven these true stories of perseverance into a heartbreaking, suspenseful, and moving account with the narrative force of a thriller. Compiled from extensive interviews, The Last Jews in Berlin reveals these individuals’ astounding determination, against all odds, to live each day knowing it could be their last.

“The author’s skillful selection of detail and his narrative drive have created the type of footnote [to history] that illuminates an entire subject.” —The New York Times Book Review

“A tour de force . . . A consummately suspenseful narrative . . . remindful, in [its] exquisite detail, of Capote’s In Cold Blood.” —Los Angeles Times
Leonard Gross is a journalist and author. Much of his reportage was done for Look magazine, where he served for twelve years as senior editor, Latin American correspondent, European editor, and West Coast editor. Gross has authored, coauthored, or ghostwritten a total of twenty-two books, including both novels and nonfiction. He currently lives in Bend, Oregon.

Wndrgmom - The Last Jews in Berlin

Wow. I’ve read several books about Jewish people in Germany during Hitler’s reign. This book really gave the first hand experiences of several of them to this reader. Sometimes I couldn’t stop reading. I wanted to find out how they fared under some extraordinary situations. So many didn’t survive but these ones are a tribute to those lost.

Gwing06 - The Last Jews in Berlin

A powerful and soul stirring read. This book peeled back the pages of time and exposed us to a reality we didn't know and couldn't have imagined.

jazzmanjohn - A spine tingling true story that reads like a suspense novel!

This true story is one of the best books I have ever read, and I'm sure I will go back and read it again someday. It is an outstanding story of survival under the worst circumstances possible. Imagine a whole race of people targeted for destruction by a totalitarian government with almost no way out. Yet some find a way to survive through the help of the few who are willing to risk their own lives for the benefit of others. I could not put this book down!

This historical document remains enthralling throughout as it details the human will to survive of a people who literally were in the "belly of the beast." They lived through the nightmare of being Germans who were hunted in their hometown - the Nazi capital Berlin.

History brought to life, this account was difficult to put down, with vivid characterizations of the Jewish survivors of Berlin. I know it will be one of the books I will return to and read again.

@DaveTorty This is the same nonsense he tweeted last time praising Gowon. Maybe he's tweeting about himself and the… 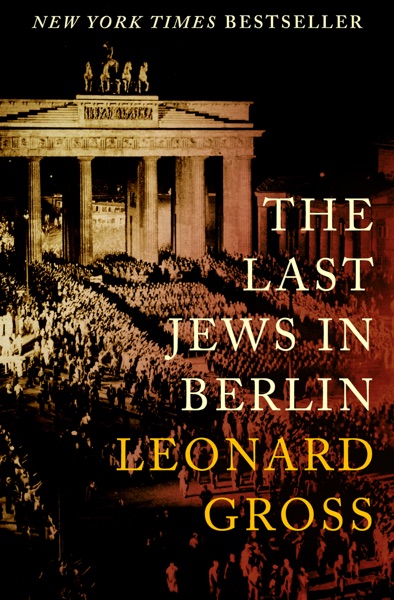 The Last Jews in Berlin Synopsis