Hunted for her secrets. Hiding in plain sight. Can one woman blaze her own trail into untamed territory?

Utah Territory, 1860
Aleksandra has spent her whole life training for the inevitable. So when a brutal Cossack tracks down and kills her father, she instinctively collects her pa’s elixir and flees. But when she meets the mysterious Xavier at a nearby trading post, she wonders if she can win both his protection and his heart…

Disappointed when the man of her dreams leaves to join the Pony Express, Aleksandra dons a disguise to follow him into the dangerous frontier assignment. Hiding behind her martial arts skills and a male alias, she longs to tell the handsome Xavier the truth. But with the killer in pursuit, keeping up the ruse may be her only chance for survival…

Can Aleksandra save both her love and her family legacy from a relentless murderer?

A Long Trail Rolling is the first standalone book in the sensational Long Trails historical fiction series. If you like bold women, authentic multicultural settings, and a dash of Old West romance, then you’ll love Lizzi Tremayne’s fast-paced adventure.

Buy A Long Trail Rolling to ride off into the frontier today!

“An authentic, emotional story of one woman’s fight for survival in an unforgiving landscape.”
–Leeanna Morgan, USA Today bestselling author

“An impressive debut…a romance, a western, and an adventure story, all rolled up into a compelling read.”
–Booksellers NZ

Author Bio:
Lizzi grew up riding wild in the Santa Cruz Mountain redwoods, became an equine veterinarian at UC Davis School of Veterinary Medicine, and practiced in the California Pony Express and Gold Country before emigrating to New Zealand. When not writing, she's swinging a rapier or shooting a bow in medieval garb, riding, driving a carriage or playing on her farm, singing, or working as an equine veterinarian or science teacher. She is multiply published and awarded in special interest magazines and veterinary periodicals. 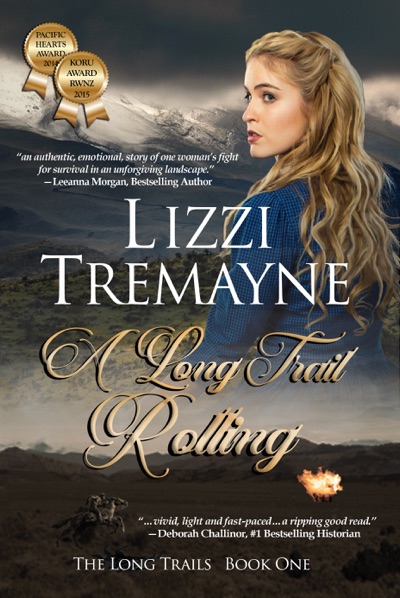