Published: 10 November 2020Book Score: 0/5This book hasn't received any reviews and votes yet!

Movies, murder and too much vodka …

Mixologist Pepper Revelle is thrilled the Bohemia Bartenders' latest gig is in her backyard: a cocktail-themed film festival that draws all the usual suspects to Bohemia Beach. But good suspects are in short supply when a body wearing an antique gold coin necklace washes up on the Florida sand.

Pepper's colleague and elusive crush Neil fears the worst for his grandfather, a treasure hunter who's been missing for months. Meanwhile, Pepper's big-bearded ex-boyfriend, an obnoxious celebrity mixologist with a TV crew in tow, is convinced someone's trying to kill him, too. To Pepper's dismay, he begs her for protection.

Stir in a couple of flickering Hollywood stars, a pushy TV producer, dashing distillers, a frantic festival chairman, a garnish-eating dog, vats of vodka and a double dose of danger, and Pepper's patience is poised to pop like popcorn. Can the mixologists shake up a solution to multiple mysteries before they're skewered like the olive in a martini?

Vexed by Vodka is the third book in the Bohemia Bartenders Mysteries, funny whodunits with a dash of romance set in a convivial collective of cocktail lovers, eccentrics and mixologists. These quasi-cozy culinary comedies contain a hint of heat, a splash of cursing and shots of laughter, served over hand-carved ice. 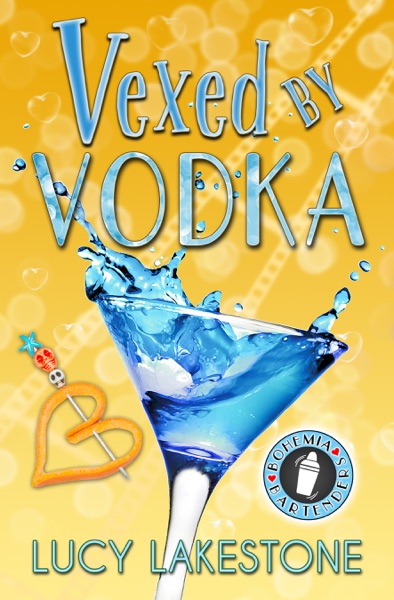