Elizabeth Strout “animates the ordinary with an astonishing force,” wrote The New Yorker on the publication of her Pulitzer Prize–winning Olive Kitteridge. The San Francisco Chronicle praised Strout’s “magnificent gift for humanizing characters.” Now the acclaimed author returns with a stunning novel as powerful and moving as any work in contemporary literature.

Haunted by the freak accident that killed their father when they were children, Jim and Bob Burgess escaped from their Maine hometown of Shirley Falls for New York City as soon as they possibly could. Jim, a sleek, successful corporate lawyer, has belittled his bighearted brother their whole lives, and Bob, a Legal Aid attorney who idolizes Jim, has always taken it in stride. But their long-standing dynamic is upended when their sister, Susan—the Burgess sibling who stayed behind—urgently calls them home. Her lonely teenage son, Zach, has gotten himself into a world of trouble, and Susan desperately needs their help. And so the Burgess brothers return to the landscape of their childhood, where the long-buried tensions that have shaped and shadowed their relationship begin to surface in unexpected ways that will change them forever.

With a rare combination of brilliant storytelling, exquisite prose, and remarkable insight into character, Elizabeth Strout has brought to life two deeply human protagonists whose struggles and triumphs will resonate with readers long after they turn the final page. Tender, tough-minded, loving, and deeply illuminating about the ties that bind us to family and home, The Burgess Boys is Elizabeth Strout’s newest and perhaps most astonishing work of literary art.

Praise for The Burgess Boys

“What truly makes Strout exceptional . . . is the perfect balance she achieves between the tides of story and depths of feeling.”—Chicago Tribune

“Elizabeth Strout’s first two books, Abide with Me and Amy and Isabelle, were highly thought of, and her third, Olive Kitteridge, won the Pulitzer Prize in fiction. But The Burgess Boys, her most recent novel, is her best yet.”—The Boston Globe

My second read of Elizabeth Strout Good story I too would say, I want to sit with Elizabeth Strout and have a cup of coffee. In her writing, I again can absolutely hear her voice telling this story.

My second read of Elizabeth Strout Good story I too would say, I want to sit with Elizabeth Strout and have a cup of coffee. In her writing, I again can absolutely hear her voice telling this story.

This book was lovely on so many fronts.

I expected more from the number of positive reviews but was disappointed and had to speed read to get through it. The characters weren’t developed and were depressing - the story itself wasn’t interesting because of that. In the end I just didn’t care what their backstory or even current story was.

Complicated yet clearly written, this story takes off in many unexpected directions. Much of the action is directed by questions of place, personality, circumstance and deception, with a good look at preconceived perceptions of native and immigrant populations. Fulfilling and thought provoking.

Perky too - The Burgess Boys

Sorry, #6...this book was anything but slow. Beautifully written, with very interesting characters, each one with his/her own story. I have read all of Elizabeth Strout's books and this is her best work.

Half the book is now highlighted with sentences I found staggeringly phrased, beautiful or insightful, or usually all three. I want to sit down and have a cup of tea with Elizabeth Strout who has become one of my favorite authors. The disappointment in finishing The Burgess Boys thank is matched by the anticipation of reading Abide with Me. Thank goodness.

A slllllloooooowwwwwv read. I kept waiting for a twist in the story, something to boost it, but it never came. I couldn't get through it. Very disappointing.

This book was an unexpected pleasure to read. Terrific character development and a story well told. I will definately look into her other books, as this was the first I had read by her.

Mkburg - All in a Name

The only reason I chose to read this book is because my name is Burgess, and I was curious. Now, I want it read other books by Ms Strout. The character development was thorough and the author took the opportunity to weave different cultures and diversity into a fabric of family and community.

I enjoyed this book. The story is told around an event that really happened in Maine in 2006 when a pig's head was rolled into a Somali Mosque during Ramadan. The characters all have their own dysfunction but are quite believable. I found this story interesting in that it must be so difficult for some people to acclimate to the U.S. only because they can no longer live in their own country for fear of death. It is interesting when one of the characters from Maine goes to NY for the first time in her life and finds it so foreign and difficult to get around. She realizes it must be how the Somalis feel about living in the U.S.

My only complaint is the persistent anti-Maine sentiment. I know some will say the exact opposite because of the outcome, but...I'm an ivy-League educated successful Mainer who didn't grow up here but was annoyed by the stereotypes. We are not all in the cold and dark. Our climate is very much like NY and Boston. There are many who embrace our beautiful world and are not all sad and desperate like those in Shirley Falls. I would like to add that as much as Helen may not be likable, this Mainer appreciates her love for her husband and children and her position on being duped. I have full faith that she and Jim reunited. Xxoo

This is a wonderful story, gently told. I could see my family in the characters. It has a lot of human sadness but somehow ends on an uplifting note

@ryanjamesjarman @Tim_Burgess Can’t wait for the boys to back on tour Ryan!

@martin_carr @Tim_Burgess Yeah, had one of those bad boys. What’s the prerecorded tune that plays when you hit the yellow button?

@martin_carr: 1992 - I’m listening to Pavement, King Tubby, Tim Buckley, The Flaming Lips and The Beach Boys on the first floor of a hou…

@judith_rafferty @Tim_Burgess Thought at first they were just pretty boys, Rio was the game changer for me and star…

4 of 5 stars to The Burgess Boys by Elizabeth Strout

@theQuietus: "Since hearing the Beastie Boys, and probably De La Soul and A Tribe Called Quest, I’ve always been interested when a great… 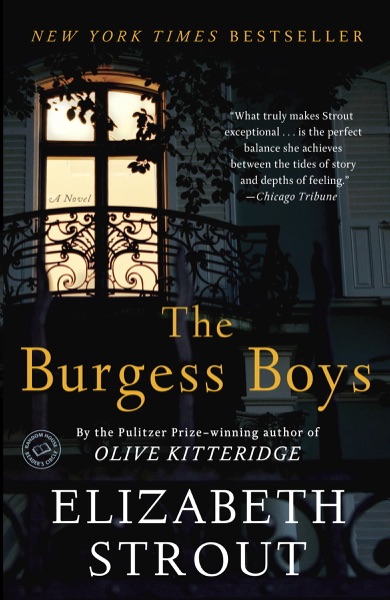